For all things Chicago Bears

Particularly frustrating loss considering the injuries on both side of the ball for the Jints, but the Bears could not take advantage of a weakened team. I'm almost wondering if they came in with a little bit of a swelled head after the W against Houston and being 2-1. Almost.
Tough week to give out balls or horns as this was an ugly game.

Fields Zone
Justin looked better today, and got many fans pumped up after hitting a crossing pass first play, running for a few first downs, and finding Mooney deep for 51 yards. No turnovers today. The second half was a different story, as the indecision and bad throws showed up again. Bears inability to pick up the blitz hurt him too.

GAME BALLS
- Badgely: came in off the street and nailed all 4 FG's.
- ESB: made some key blocks downfield on some big plays, made one nice catch and could have had another if JF1 could get it to him.
- Morrow: helped keep the D in the game.

HORNS
- Redzone/second half offense: difficult to tell if it was Getsy or lack of execution by the O, but the Bears could not take advantage of an average Jints D that was hurting with injuries. Halftime adjustments missing.
- Mohammed: Constantly out of position, no pressure on the QB. He floats around like a butterfly but no sting.
- Pressure on QB: We saw a few more blitzes, but otherwise Jones had all kinds of time. Coverage may have been good but Jones was way too open to run for big gains as well as 2 TD's.
- Rookie DB's: too many mistakes, showing how they miss Jaylon Johnson. Gordon got a PI that was really ticky-tacky and turned out to be the difference in the game as the Jints went on to score a TD.

We were all excited to see VJJ on the field, and particularly when the punt was boomed deep at the end of the game so VJJ could get a big return. He made a typical rookie mistake of looking to run before catching the ball. I'll pass on a horn for him.
On to Minnysoda for a tilt against the VIqueens. Hopefully they're still jetlagged next Sunday.
San Francisco has always been my favorite booing city. I don't mean the people boo louder or longer, but there is a very special intimacy. Music, that's what it is to me. One time in Kezar Stadium they gave me a standing boo.

Fields' handoff fakes are never as good we saw from Jones, but Fields' were particularly inept today.
Top

EJ game ball.
The Bears lost a close game to the Dolphins but why is it that the sun shined brighter, the air seemed cleaner, the sausages smelled sausagier, and the Soldier Field grass actually seemed greener.
Top

I thought Brisker had a decent ge in run support.

Jones Mustipher and Lucas all had really bad games.
Top

I don't know if VJJ deserves a pass on his muff, but at least he let punts bounce into the EZ and didn't try to return KOs from the EZ, both things we haven't seen in a while.
Top

Brisker was a guy who missed the contain on a few of those bootlegs. I have thought both he and Gordon have played poorly so far.
This is a fan / opinion chat board. The opinions in this post are just that - my opinions. Please treat them as such unless otherwise notified. Have yourself a great day.
Top

Eddie is having a great year
Top

Brisker was a guy who missed the contain on a few of those bootlegs. I have thought both he and Gordon have played poorly so far.

You might be correct but I seem to remeber him turning a few plays in and making a few good tackles. I dont think he has played poorly but am open to the concept
Top

Brisker was a guy who missed the contain on a few of those bootlegs. I have thought both he and Gordon have played poorly so far.

yeah, he was playing spy or robber quite a bit and would just get sucked in.

that play where he had the sack in the second half and the announcers were like "THEY"RE PLAYIN THE BOOTLEGS COMPLETELY DIFFERENTLY NOW" was silly. He just read it correctly and played it soundly.
Top

Game Ball
- New kicker we picked up at the 11th hour.

Horns
-Everybody fucking else.
"Thou who runneth to the ball, good things shall happen." ~ Flus
Top

Brisker had a bad half. He was solid after. I feel that’s the first game he had a bad stretch.
Gordon was bad. I will say maybe 2 positions to learn is affecting his development, but time will tell.
Patrick is bad at ether G position. I hope he plays C soon because Mustipher would miss a block against the blocking sled.
VJJ I’ll give a pass to as first game but only good thing was he didn’t make bad decisions on taking kicks out of the end zone he shouldn’t have.
Fields was better but obviously Getsy doesn’t trust him. Getsy was understudy for an OC that didn’t call plays so he’s got a lot to prove.
When everyone knew they were running they still were productive. Watched every MN game that wasn’t on same time as Bears and I had never heard of Williams.
Ebner looks slow.

Like that EJax is looking like the guy we paid big money too.
Mooney had a good game.
MOTML League: Eskimo Brothers
Top

Game Ball
- New kicker we picked up at the 11th hour.

Horns
-Everybody fucking else.

Mooney had a good game with a nice catch on the bomb.

DC Williams, CBs and Ss, for not understanding what "outside containment" is. After the 5th bootleg you'd think they'd adjust. No.

Run defense: We don't have one.

Velus: I just can't fucking believe he did that. I really can't. 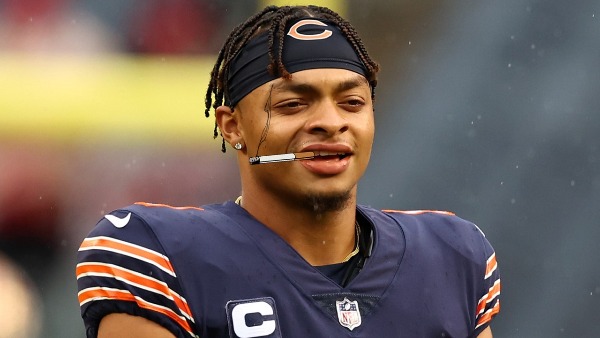 The cigarette has been passed from Jay Cutler to Justin Fields.
Top

Balls: Badgley, street pick up and 100% in attempts. Jackson, looks to be building his resume for his next team.

Fields played better, but still looked bad on his layups. Dude just cannot throw a screen or dump pass it seems. Reminds me of Mitch, high, behind or low but never on target.
"alles wird gut"
Top
Post Reply
16 posts • Page 1 of 1